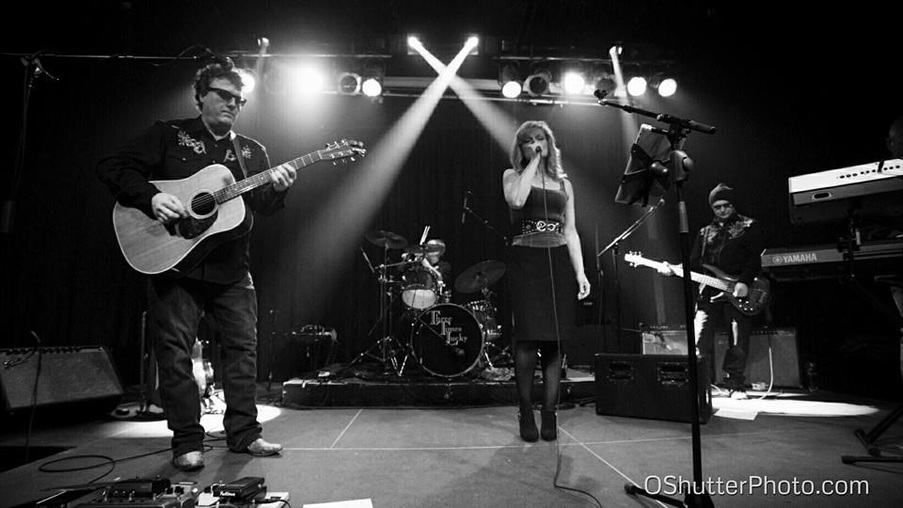 Hailing from Canada's Capital, popular Ottawa Valley based blues artists THREE TIMES LUCKY are at your service, offering up a tantalizing combination of vintage R&B, Rock and Roots classics, along with a healthy shot of Blues-Rock from their vast arsenal of catchy original material, all influenced and inspired by a myriad variety of classic artist & genres from the 20th & 21st centuries.
So bring your dancing shoes, grab a partner, and get your Mojo working!.

Whether performing to a festival crowd, a packed dance floor in a club, or at a private party, expect to find the Lucky's at their best!

-Three Times Lucky have performed yearly with four return engagements at The Limestone City Blues Festival in Kingston ON.

-Appearances at The Casino Lac-Leamy, Ottawa CityFolk/ Marvest Festival, The Bronson Centre, The Ottawa Glowfair, the Casino Lac Leamy and The Ottawa Capital Fair with The Lucas Hanneman Express .

Review for the 2017 Kemptville Live Music Festival,  by Kristen Bell-Lalonde for Sound Check Entertainment: Published July 28:
“The final two days of Kemptville Live Music Festival were full of amazing music from greats like Burton Cummings, Bill Durst, Sue Foley, Gordon Lightfoot and Three Times Lucky. Upon my arrival at Kemptville Live on Saturday, I could hear Three Times Lucky performing for the whole walk from my car to the entrance. They had a sound that was captivating and definitely held notes of old-timey blues. This band comes from Ottawa and weren’t too far from home performing at Kemptville Live. They were very fun to listen to and seemed very comfortable up on stage. They had a strong stage-presence and were very good at drawing the audience in. This was definitely a happy act to stumble upon first.”

Review for the 2015 Ottawa CityFolk/ Ottawa Marvest Festival, written by Ben Yung and published in The Revue:
“Three Times Lucky! Knee-slappin', toe tappin', very dance-able blues and blues rock. Sounds like a party is going to break out early at Irene’s. Better start running a tab.”

Review for the 2014 Calabogie Blues & Ribfest, published in the 101.9 Dawg FM Times-Calabogie Blues Special: Edition:
" Saturday's line-up featured some of Canada's top blues artist such as Three Times Lucky, Ben Racine, Soulstack and Steve Hill. The crowds continued to grow through the night in anticipation of headliner Colin James."

Review for Three Times Lucky’s first album, 'Mojo Off'a  Muddy', by Jim Hurcomb for Bounder Magazine:
““Mojo Off'a Muddy, recorded mostly live off-the-floor, captures the sound of the band in concert. DAWG 101.9 FM jumped on the record, especially the first single, The Cliché Blues. What grabs you on the first listen is the variety of material on the record” “Three Times Lucky it is! Obviously there is a lot more than just luck. A band can have all the opportunities in the world to make it, but if the music and the attitude don’t cut it, it’s not going to happen. How Lucky can you get?”
Jim Hurcomb - Bounder Magazine Fall 2011

​Ottawa based THREE TIMES LUCKY were formed in 2010, by a group of experienced like-minded Ottawa Valley performing artist, offering a combination of vintage blues, rock and roots classics, along with a healthy dose of their own catchy original numbers

Along with the usual collection of Hard Rock n' Urban Blues numbers, DOWN TO TEXAS, showcases Three Times Lucky’s versatility in songwriting, offering a variety of rockers, soulful Country ballads, R 'n B and Roots based numbers to the album.
​
DOWN TO TEXAS also features t​he sensational, and world renowned talents of 3 very special guest artist, by way of Austin TX, Mark ‘Kaz’ Kazanoff, John Mills and Adalberto Gomez, otherwise known collectively as THE TEXAS HORNS!
​
​Recording their tracks for the album in Houston TX at the world famous Wire Road Studios, The Texas Horns added some real Tex-Mex flavour to the Southern styled album title track 'Down to Texas’, as well as turning up the heat on the sultry blues crooner
‘Lost Your Good Thing'.
​
DOWN TO TEXAS was released in September 2013 to good reviews, and several tunes on the album have garnered local and national radio airplay in Canada, making the Top 20 albums on DAWG 101.9 FM. The new album has been well received by the local blues community in the Ottawa Valley and is enjoyed immensely by all who hear it, or those lucky enough to catch Three Times Lucky live at festivals and clubs.

Our albums are available for download on CD Baby, iTunes and Amazon

​We must also mention the many special guest appearances by artist such as Norm Provencher (guitars and lap-steel guitar), and Miss Hannah Stewart on vocals. Three Times Lucky have also been fortunate enough to have had the phenomenal talents and the support of musicians like Allan Wilmore on keyboards and vocals; Jeff Holgate on keyboards, harmonica and vocals; Neil Seally on the upright bass; Rockin' Randy Myles on Acoustic guitars, Gary Schertzer on harmonica; and special guest Bruce Richard, Bobby Littlemore 'Louder', and Big Bad Doug Bagley on lead guitars.
​
Without the amazing talents and involvement of these brothers, sisters and friends, there would be no Three Times Lucky!

2015 brought the release of a new 1080p HD multi-cam performance video, recorded at a 2014 Live show recorded at Greenfield's Gastro Pub and House of Grooves in Ottawa ON. Three Times Lucky have plans in the works to release a limited issue vinyl EP of this  show . Check out the link below to our 3 Times Lucky YouTube Channel and see the finished videos:
​
THREE TIMES LUCKY YouTube Channel:  https://www.youtube.com/channel/UCU1jJ1QwI8PMsvPAHeU7GjA

The members of Three Times Lucky wish to extend extreme thanks and gratitude to Steve Rose, and his top-top crew at UNAVOX: https://www.youtube.com/user/powerhousedv, for all their help and expertise in directing and producing the final video.
​
We also want to give Big-ups and praise to Scott Walsh at Sound Creation Recording Studio:  http://www.soundcreation.ca/  for producing, recording and mixing the awesome sound of the show he captured for us that night.

Finally, and most importantly, we wish to thank our fantastic, and truly, most awesome fans! It is because of you folks, who go out and really support live music, that we are energized and inspired to keep working at this everyday. Thank you for all your support and encouragement over the years, and also for coming out to so many of our shows. We want you to know that you can always count ​on us to bring our top game to every venue, studio or festival where Three Times Lucky make an appearance.

THREE TIMES LUCKY would like to take this opportunity to acknowledge the devotion in time and resources, and the incredible skills of the many photographers over the years who have come out to our shows and have generously allowed us to use their amazing videos and pictures on our albums, posters and web-sites. Most honorable mentions and kudos must be given, in no particular order, to Rick Arbuckle, Robert and Sharon at Street-Ings Photography, My Visions Photography MVP, Bianca Nadeau Photography, Capital Photos Lori Hoddinott, Sandy Sharkey Photography, Tom Linden Photography, Richard Dufault at OShutterPhoto.com, Rheal and Debbie Doucette, Peter Waiser, Rick Saikaley, Mike Collier Photography, Alex Dasher Deszcz, Nykki Wilmore, Trevor Denault, Tammy Lane, Razor Mike Pihlainen, Sue Marriner, Kevin Stewart, Sophie Gawn, Jan JT Robertson, Jenn St. John Lecompte, Tracey Sliter, Ann Cameron-Fournier, Allan Boyce, Terry Steeves, Debra Thornington, Liz Sykes, Blues Bud Brent Diab, Allison Edgar, Judy Marriner-Reid <3, and all of our many fan's who have kindly posted pictures for our use over the years.
We know it's not always that easy to make some of us in this band look so good, so thanks for that too. ;)
Our sincere apologies if we have left anyone out.
​
The members of Three Times Lucky can't really thank you all enough. CHEERS!!!
+++++++++++++++++++++++++++++++++++++++++++++++++++++++++++++++++++++++++++++++
Copyright Three Times Lucky 2016